You never know what you’re going to find when you go digging for rare rocks. You might find a stone that looks exactly like a famous Sesame Street character. 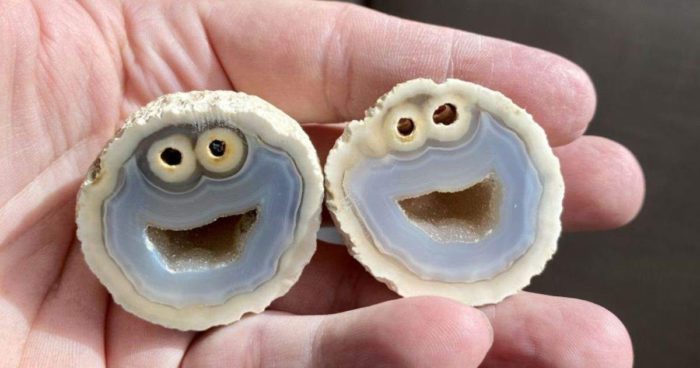 A gemologist has released pictures and videos of an unusual agate stone. On the outside, it is a simple round stone. When a split reveals the inside of the stone, however, both inside rock faces look like the famous cookie lover.

The resemblance is truly remarkable. The hole formations in the stone look just like a smiling, wide-eyed Cookie Monster.

A gemologist named Lucas Fassari found the rock in the Rio Grande do Sul region of Brazil last November.

Mike Bowers is a gemstone dealer in California who now owns the unusual rock. In a Facebook video that has gone viral, Bowers showed a pair of hands opening the rock to the tune of the classic Cookie Monster song, “C Is for Cookie.”

Bowers said he has received offers of more than $10,000 for the rock.

The news was a hit among geologists, rock enthusiasts and Cookie Monster fans all over the world. Jacqueline Antonovich, an assistant professor of history at Muhlenberg College, tweeted an approving picture of the rock. It received over 500,000 likes.

Me no geologist, but me think dat rock look a lot like me… https://t.co/444KeOrAbi

You’re right, Cookie, it does. We better not leave it near any cookie jars, just to be on the safe side.