We’ve all had days when we’d rather not go our job, but would you go as far as playing dead to get out of working? That’s just one what lazy horse named Jingang routinely does.

According to his owners, Jingang has perfected the art of acting like he’s dead. As soon as someone approaches him for a ride, he flops dramatically down on the ground, rolls onto his back and closes his eyes. 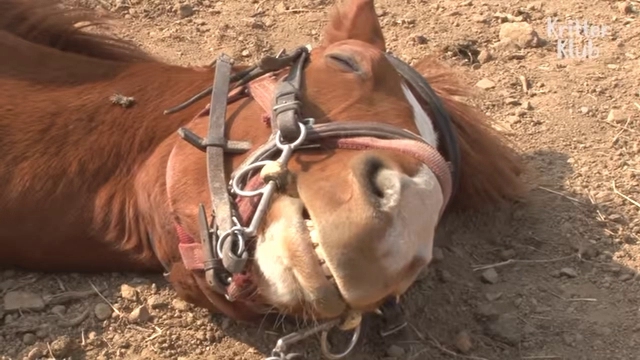 They admit they were fooled the first time the sly horse pulled this move, but realized that as soon as they walked away, he jumped up and looked perfectly fine. It seems that some horses are like some people. They just don’t like to work, and they’re not going to do it willingly.

The horse has even done his dead routine when someone’s already in the saddle and ready to ride. He tosses that rider right to the ground. As his trainers say, “He’s cute but naughty.”

Jingang’s incredible acting may not have won him an Oscar, but the video depicting his antics has racked up more than 2 million views. Jingang certainly has a career in show business if he wants one.