A video of a base jumper being rescued by an elderly woman has emerged on social media and gone viral. The incident occurred at an Acapulco resort in Mexico after the base jumper, Kody Kosloski, misjudged his trajectory and crashed into the woman’s high-rise apartment. 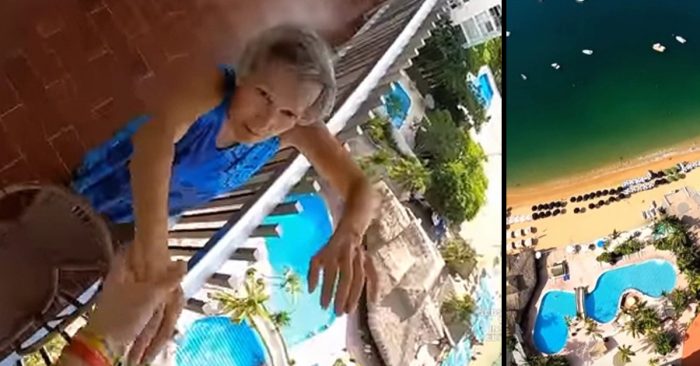 Footage of the Scary Incident

Kosloski, a Michigan resident, was recording his stunt from the top of the tall building. The on-body camera captured his descent and unexpected veer to the left. Then, he crashed into the side of the apartment block.

For a few seconds, Kosloski dangled on the side of the building before an elderly woman appeared on the balcony below him. As she asked him what he needed, he told her that he was OK. When he failed to climb up to the balcony above, he pulled out a knife to cut himself free.

Kosloski was able to steady himself between the railing and roof of her balcony. As he cut himself loose, the elderly woman reached out her hands to safely guide him onto her balcony. He survived with only a scratch on his knee.

When Kosloski landed safely, he yelled, “I’m OK,” to a cheering crowd. Then, the camera panned over to his base-jumping equipment, which was still attached to the building.

The elderly woman offered him a glass of water, but he declined. In an interview with Inside Edition, Kosloski said, “That lady was a sweetheart, very helpful, kind and nice. I’m sorry for scaring her.”