Alaskans might be used to seeing all kinds of wildlife roaming through their neighborhoods, but even a hardy Alaskan was taking no chances with a bull moose on the loose.

Moose on the Loose

Anchorage resident Curtis Phelps decided to play it safe when an overly friendly bull moose ambled into the man’s yard.

In the video captured by a security camera, you can see the bull moose head right for the man as he’s taking his trash out to his shed. The moose only has one antler, which means he’s probably been in a fight recently.

Phelps pulls himself inside his shed and yanks the door shut. After a moment, the moose wanders away and decides to try his luck elsewhere.

Move Aside for Moose

According to naturalists, Phelps did the right thing. If a moose is headed toward you, it’s smart to put something in its line of vision.

Moose are not aggressive, but they will attack if they feel provoked. They can be dangerous to humans because of their sheer size and power. A North American moose can grow to about 6 feet tall and weigh over 1000 pounds.

The moose breeds in Alaska, however, are even bigger and heavier. They can grow more than 7 feet tall with an antler spread of 4 to 6 feet. They’re also fast for a big animal, with top speeds of more than 35 mph. 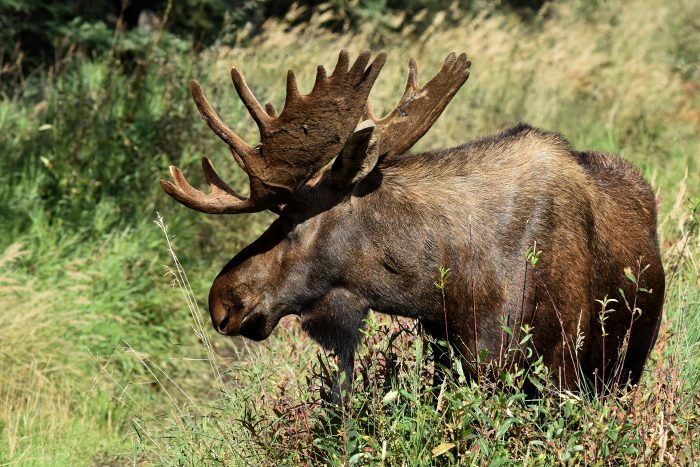 The most dangerous moose are not the bulls, but the females who are protecting their calves. They’ve been known to kill humans, grizzly bears and even other moose who got too close to their young ones.

Whatever the species, you just don’t mess with mama.