A short video has gone viral for depicting a real-life Wile E. Coyote trying to chase down a roadrunner.

Deep In the Desert

Michael Thomas Bogan is a wildlife biologist who teaches at the University of Arizona. He’s also an avid photographer of the desert Southwest’s fascinating, beautiful environment.

Recently, he was in the Santa Cruz riverbed in Tucson, when he noticed a roadrunner zipping past with a coyote in hot pursuit. Bogan filmed the desert encounter and posted it to his Twitter account with the narration, “That is a straight-up cartoon.”

It Didn’t Even Say, “Beep Beep”

In the video, you can see the roadrunner moving at top speed while the coyote gives up halfway through the chase.

In just a few hours, Bogan had fielded dozens of requests from news organizations and channels asking to use the footage. Dozens of Twitter posters responded with their favorite memories of the classic cartoon. Many pointed out the way the coyote seems to just stop and give up halfway through the chase. Did he need some Acme products or was it just, as Bogan said, too hot to keep running?

Roadrunners have adapted incredibly well to desert life. They don’t need to drink water, and their diet consists of insects, small birds, grubs and reptiles that abound in the desert. 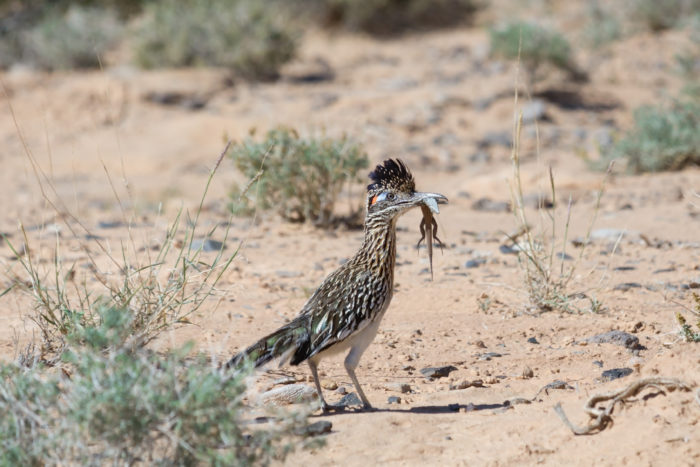 The tough little bird’s favorite food, however, is the western diamondback, a deadly rattler that’s poisonous enough to kill an adult human. Roadrunners have no fear of these snakes, and regularly attack them for food.

That’s why Native Americans held a special reverence for roadrunners, admiring them for their courage, cleverness and speed.

Yes, they’re fast. Roadrunners reach top speeds of about 25 mph, but that’s still not enough to beat a coyote. Most coyotes can run about 40 mph. It’s a good thing the coyote keeps buying inferior rockets and anvils to give the roadrunner an edge.

Previous Post: « ‘Robot Dog’ Unleashed In Public Park To Encourage Social Distancing
Next Post: Special Face Mask Lights Up When It Comes Into Contact With Coronavirus »